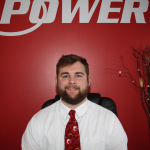 Between trade-shows, managing an office, managing a product warehouse, and taking/making sales calls, Marc Sheil has been busy. As the National Sales Manager, Sheil was responsible for being the primary point of contact for all things Sideline Power. “For the last fourteen months, Marc has dedicated himself to these ends and we’ve been really successful because of it,” mused Matt Starr, CEO of Sideline Power. He continued, “Marc is key to the growth of Sideline Power and where Sideline Power goes [from here] with Sales and Marketing decisions.” Thus, when it was time to name a new VP of Sales and Marketing, promoting Sheil was the obvious choice.

“I’m very excited for the opportunity,” commented Sheil. “I look forward to continuing our growth and success at Sideline Power and I know our future is bright with the team we have in place and the opportunities on the horizon.” Sheil is a Nebraska native, born and raised in Palmyra, where he played basketball for Starr. Sheil attended Nebraska Wesleyan University where he played baseball and earned his Bachelor’s Degree in Sport Management with a minor in Legal Studies. After graduating, Sheil moved to Virginia for a year to complete an internship at the Virginia Beach Field House, a large indoor facility that focuses on league sports, tournaments, and camps. Sheil also spent some time in a marketing and promotional role with the Lincoln Haymakers, an arena football team, running game day activities and writing press releases.