Your #1 Choice For Coaching Communication

Itâ€™s all power and no sidelining as local entrepreneur Matt Starr decides itâ€™s time for his business, Sideline Power, to expand. Sideline Power has long been recognized as the number one choice for coaching communication. From headsets and end zone cameras to Reveal, a ground breaking instant replay system, Sideline Power consistently provides world class products and service for high school coaches and football programs. Since its inception, Starr, Founder and CEO of Sideline Power, has run a successful business from a small office in Lincoln, NE. But with success comes growth, and with growth comes evolution. For Sideline Power this includes new office space, warehouse, and headquarters. But Starr, being humble in nature, doesnâ€™t forget his roots. â€œI want to help build the community that gave me so much when I was growing up,â€ Starr said. Starr purchased the vacant building perched on the edge of Highway 6 in Greenwood, NE in late 2014. After several months of renovations, the new headquarters of Sideline Power is ready for business.
On a tour of the new headquarters, Starr showed off dedicated work stations for an office manager, technical support and equipment repair, as well as a fully stocked shipping department. â€œOne of the biggest reasons for expansion is that we needed a warehouse to stock all of the equipment,â€ said Starr as we walked into the expansive stockroom. The headquarters is also well appointed with an employee lounge, and overstuffed black leather chairs in the customer waiting area. One of the innovative things that Starr did in his office was to create an â€œIdea Wallâ€ were he can write directly on the wall with dry erase marker. Starr imparts that, â€œSometimes you just get this little thing that pops in your head. I wanted to be able to quickly jot things down somewhere that wouldnâ€™t get lost like a slip of paper. That way I could come back to it later and flush it out into a full business plan.â€
Many people in and around Greenwood have noticed that the building is now occupied by Sideline Power. â€œIâ€™ve had several people contact me asking if I am hiring or sending me resumes,â€ admitted Starr. While Sideline Power is fully staffed at this point, Starr wants to thank the community for welcoming him and his business back to Greenwood by hosting an open house. The open house will be held on December 26th from 2PM to 6PM, is completely open to the public, and will have light snacks and soft drinks. If you are interested in attending, the new Sideline Power headquarters is located at 218 Hwy 6, Greenwood, NE 68366. 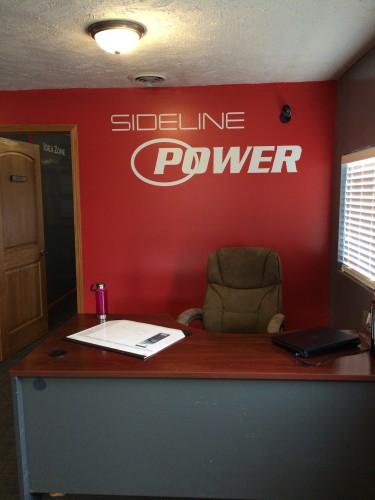