It’s game night. Tensions are high. Your bread-and-butter run play gets blown up in the backfield. You diagnose the problem and believe it’s your right guard. You pull him aside during a timeout and ask him what shade the nose is in.
“He’s been in a 3-technique. I’m blocking him!” He responds.
You alter your game plan to combat their front.
What you didn’t know is the nose guard was actually in a 2i and continued to shed the inside of the offensive line. The speed of play rattled your lineman and he claimed he blocked his man to avoid embarrassment. Unfortunately, once Saturday morning arrived you learned the d-lineman wasn’t in the 3-technique, and that your guard was indeed the problem.
Every coach is aware of the importance that a Saturday morning film session holds. It is the prime time to improve players mentally and progress as a team. Reviewing the X’s and O’s, missed assignments, plays executed, plays not executed and the several key points to improve on, is not easy to squeeze into a few hours. After studying the footage a good coach knows exactly what needed to be done to defeat the opponent. The problem is he is a day too late and that information is useless now. All one can do is hope to raise his players’ awareness on what they did wrong, and teach them how to improve on it for next time.
What if there was a better way to coach your players? What if a coach could see the film on game night, instead of waiting until Saturday morning, when it’s too late? Imagine the endless possibilities that could unfold if coach could show his players select plays from the first half to review at halftime. Taking it one step further, at the end of each quarter and during timeouts. Or even if the offensive coordinator could pull his guys aside to watch film while the defense is on the field, and vice-versa.
Luckily for you and your team, this is now all possible. It’s new, it’s completely legal and it’s sweet. As a coaching staff you all now have access to the instant replay of every play, organized in front of you right at your fingertips. 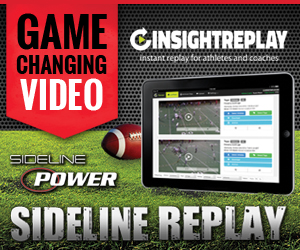 Insight Replay produces Reveal, which is the most advanced sports video system on the market. Reveal gives coaches and athletes immediate video feedback on the sidelines in practice or during games. Reveal streams video replays to iPads and televisions on the sideline and in the press box. Reveal allows athletes to see what they just did before they do it again. The immediate feedback allows athletes to master skills quicker and improve faster.
“The Insight Replay system that Sideline Power has provided for us has been a great learning tool for us this summer. Kids seem to pick up things faster if they can use a visual tool. We have been able to show our players their mistakes and correct, showing them the answers to their questions immediately without having to wait for the next day’s positional meetings and film sessions,” Said Daniel Marangi, coach for 7x New Jersey State Champion and 2x National Champion, Don Bosco Prep.
“We are excited to begin using it in our scrimmages and games later this summer as we have always relied on what our players have told us they were seeing game as well as our staff’s vision/memory of previous plays. The Insight Replay will provide the instant feedback for us to make any in game adjustments we need to make with 100% accuracy.”
Give your team the advantage. Gain instant feedback. Coach NOW, not later. Football technology is evolving, it’s up to you to join the movement.